Perhaps the education mandarins are right 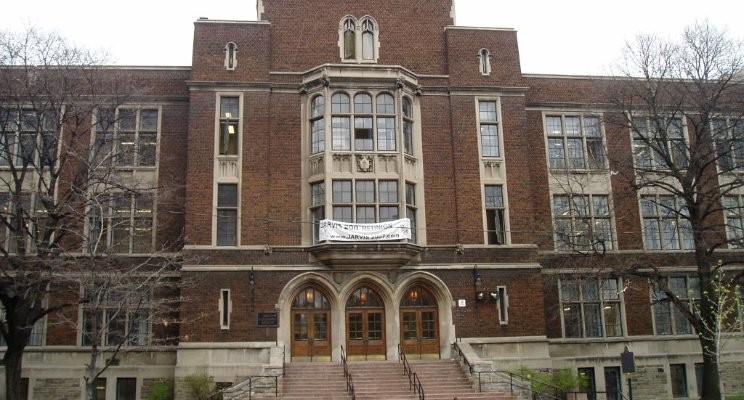 Perhaps the education mandarins are right. There is no need for new skills for the future. Our culture really hasn’t changed. All fake news.

Jarvis Collegiate Institute was one of the top schools in Canada in past years. It may still be. It saved me as did Bishop’s U! As you can see, it was built as a temple for instruction—content delivery when content was finite. Temples were built to preserve the immutable. Schools, churches, armouries, post offices, city halls/courthouses, and union railway stations all served a similar role: they were the key pillars supporting our prosperous society.

By the late ’50’s and early ’60’s, the boom years, the temples of instruction had evolved into cheap modular fabrications with outlying communities of portables – trying to serve the same purpose, but without the status of a pillar of society. The system could not keep up with population boom, so the bureaucrats improvised downward: No longer that key pillar, but just a cellular mass instructional machine kept humanized for the progressively disengaged students by remarkable teachers. It was as if the educational officials had declared (after a brilliant but failed attempt at reform by Premier Davis), ‘Mission accomplished!’

The Industrial Age system was built on hierarchies, homogeneous populations (whether they were or not) and mass production of goods, services and information. That’s not the age we now live in. We just haven’t replaced it or planned for it in education. Society is showing the way, but the mandarins are sticking to their old guns. Some newer schools, Bracebridge High (Bracebridge and Muskoka Lakes Secondary School), for instance, indicate that some are thinking, at least with respect to the physical environments and community involvement.

Experts with solid evidence in most major countries have identified the new executive skills needed for the coming, almost already here, working world. Michael Fullan is top expert in Canada, Tony Wagner in the States, and Michael Barber in the UK. For years they have been giving rationales for a competency system to enrich the curriculum to very little avail so far. While certain key skills are imbedded into the curriculum as published by the Ministry of Education, Ontario, unlike New Hampshire, for instance, has no demonstrable competency outcome for the students. Why not? No answer.

Temples by definition are not agile. They are constructed to preserve a culture, not to change it. ‘It’ here is a common curriculum mainly dedicated to providing basic literacy and numeracy for all though to age 16, and to winnowing out all those who can’t progress through to ‘higher’ schooling. They went on to productive manual labour, the basis for some 38% of GDP in the States, now under 10%. The need for that labour has disappeared, and the large, non-academic but very smart, cohort of students are left hanging, unprepared for the very large number of unfilled jobs.

Meantime ‘schooling’ has carried on, not as a parody as with Last Night at the Proms, but as usual. In the working world the new wealth has moved from mass production to digitized minimization of the inefficient and maximization of personal value. This mindset is best illustrated by GE’s latest ad. That is what schools need to be supporting by preparing students to think like that. What is getting in the way? (Note that when she is at school, there are still rows of desks with the teacher delivering content – schooling carrying on as usual.) Here are a few reasons:

So while we look at blistering-speed tube travel, self-driving vehicles, instant data feedback, availability of most common information in multi-million hits in less than a second, the mandarins in educational office blocks carry on as usual. Perhaps they are right. It is all fake news.

Free E-Book: Graduated and now what? Tips for new grads!